We Told You So, Now Let’s Tell Them!

News broke earlier today that Arizona Legislature leadership and the Governor had reached a deal on the budget.  Of course, knowing that the taxpayers do not want a tax increase, the Governor must have backed down, right?!  WRONG!!!

Instead legislative leaders have agreed to ask the voters to decide whether they want a tax increase on sales tax.  Here is the reason that Senate President Bob Burns gave (from the Capitol Media Service article by Howie Fischer):

Burns acknowledged that he has, until now, been adamantly opposed to hiking taxes, even to the point of simply referring the question to voters. But he said there really is no choice, saying even that $600 million in cuts, even coupled with federal stimulus dollars and other accounting maneuvers, is insufficient to deal with an anticipated $3 billion deficit.

“So my belief now is that we need to put that out there for the voters,” he said.

“If they pass the tax increase, obviously we’ll have more revenues,” Burns continued. “If they don’t I think that sends a pretty strong message to the Legislature that we’re going to have to make significant reductions.”

If they don’t, it will send a pretty strong message to the Legislature?!  We seem to recall 10,000 plus taking time out of their schedule on April 15th to protest big government, big spending, high taxes, and lack of accountability.  Now that wasn’t a message?

You know, we always hear that Republicans are going to be strong leaders for small government, less taxes and spending, etc.  Now we are hearing that they want maintain the size, growth, and spending of the current government.  Have they forgotten what they promised?

We are ripped!  Yet, we can still do something about it.  Everyone of us needs to get on the phone to our state legislators and demand that this tax increase NOT be sent to the ballot.  We have already spoken.  Call them today and tell them NO!

If you are unsure who are legislators are, please visit here: http://www.azleg.gov/

Look Out Taxpayers, They Are Going to Blow It

We have all watched intently on the budget discussions over the past several months unfold in the legislature concerning the budget fix of 2009 and the budget for 2010.  Many of us have spoken with our legislators, attended Townhall forums, and listened to economists say that raising taxes (even temporary ones) during a recession is a very bad idea (and could be catastrophic).

In fact, we would even opine that the communication has never been better between our elected representatives and the voters in many regards.  Legislators have heard our voices loudly and clearly to NOT raise taxes.  Many of us expressed what a great opportunity we have to shrink the big government of the Napolitano administration.  Many legislators spent long hours figuring out ways to cover the huge gaps between income and expenses.  They even came up with a plan and a budget was sent to Governor Brewer for approval.

Early in the week, we heard that Governor Brewer is not happy with the budget proposal sent to her and will even shut down government if an agreement cannot be reached by July 1.  The latest word now is that Senate President Bob Burns said that there is a tentative agreement to ask lawmakers to refer a sales-tax to the ballot, though no specifics have been outlined or official announcements have been made.

Say what?!  We think we made it pretty clear at the TEA parties in Tucson and Phoenix and in our conversations with our legislators that we don’t want more taxes — even if they are temporary.

Let us point out a few points to the Governor and the legislature:

Also, what is interesting to note is that the tentative agreement indicated that if the vote went to the ballot, the language would provide directives where the money, if approved, would be sent to specific accounts like education.  Here’s a problem… the vast majority of the spending for education is in administrative costs not in the classroom.  So, even if the vote passes, money still would not be going to the classroom.  Rather, it just would be eaten up by administrative costs.

If the legislature and the governor want to do right by the taxpayers and for Arizona, they need to remain focused on a very simple thought — Shrink Government.  Then, and maybe then, our mood will change to happy. 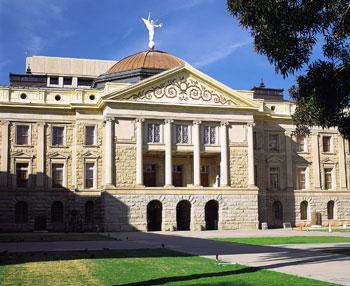 Over the weekend, the Arizona Republic had a puff piece interview with Ms. Sikokis discussing how difficult it is for her to do her job in this present political and economic climate.  As if the interview were not disgusting enough because of its lack of substance, there was gross negligence for failing to ask reasonable questions like “Why does Maricopa County need a lobbyist?”.

There are two excerpts from the interview that I would like to draw your attention to.  The first question is a follow up to a discussion of Maricopa County not being able to cut any further because of mandates:

A: Yes. I don’t think it’s out of the realm of possibility that if the state approaches us in such a way . . . this board is no longer to be accountable and answerable to the taxpayers who elected them to do the jobs that they need to do because they’ve taken all of the revenue that we count on and depend on. Then yes, I think this board would look at all of their options.

The second excerpt that I think is worth pointing out is:

Q: Who do you consider the county’s allies at the Capitol, and which relationships need some work?

A: Certainly the governor. Our board strongly considers both the Senate president and House speaker friends. We feel like we have an excellent relationship with all of the legislative leadership and certainly the members that comprise the Maricopa delegation. We really appreciate the out-of-county members as well. The problem seems to be those legislators who perhaps are not keeping an open mind on the governor’s five-point plan . . . the more conservative Republican legislators in both bodies.

In other words, Ms. Sikokis is not only openly admitting that the county is advocating for a tax increase during a recession, which in turn will trigger an economic depression, but is also blaming conservatives for being a roadblock to the tax increase flying through the Legislature.

As I mentioned above, there is one element that is not being discussed.  Why is it that we even need taxpayer-funded lobbyists?  Essentially, we are paying for employees of government to head to the legislature to lobby for more of our money.  That, my fellow patriots, is insane.

The Goldwater Institute has a great report that they published in 2007 by Benjamin Barr.  I strongly urge you to visit their site and download a copy.

Here is the dirty little secret that Maricopa County is not telling you but the Goldwater Institute discovered.  Maricopa County, as of 2007 when this report was published, had 85 taxpayer-funded lobbyists.  Now, imagine the tax dollars that are allocated just to pay for salaries.

Thus, we are left with a natural conclusion.  Maricopa County can make more cuts — starting with reducing the number of lobbyists on staff — if they were interested in doing what is best for the taxpayers of Maricopa County.  Unfortunately, much like the empty rhetoric Ms. Sikokis in this train-wreck of an interview, Maricopa County is only interested in growing government on the backs of an already stressed economic base — us.

Arizonans In Action Board Member Roy Miller penned this Letter to the Editor that appeared in the Arizona Republic on Wednesday, April 15, 2009.

Last Thursday (April 9th) I participated in a meeting entitled “Convening the Community,” sponsored by the Greater Phoenix Economic Council (GPEC). It probably should have been called the “Jan Brewer Tax Increase Cheerleading Meeting.” Senate President Bob Burns and House Speaker Kirk Adams offered a more conservative approach but it seemed clear to me that the real purpose of the meeting was to help the undereducated attendees (like me) “understand” the need to raise taxes.

Raising taxes in a recession should be considered economic suicide but there were many financial statistics presented to lead one to believe that a tax increase is needed. However, one huge area for potential savings, transportation, was not discussed, even though transportation expenses constitute over a BILLION dollars for our state. Technically, transportation money does not come from the general fund but it seems to me that failing to consider this huge area of public expenditures is to fail to recognize a huge opportunity for savings through privatization efforts like toll roads.

The master of ceremonies for the event, Michael Bidwell told the audience that the overall discussion was “not about being conservative or liberal.” That is an amazing remark because the exact opposite is the truth. Whether we address our fiscal problem through tax increases or spending cuts is the very definition of what it means to be a liberal or a conservative.

“It was long ago decided by the citizens of Arizona to provide protection in the Arizona Constitution to ensure the freedom of workers to choose whether to join and participate in a union.”

Governor Brewer is referring to Article 25 of the Arizona Constitution:

Right to work or employment without membership in labor organization

Governor Brewer takes it one step further in her press release to talk about the “meet and confer” order that former Governor Napolitano issued in December allowing for executive-level public employees to meet with a third party representative (union delegate) to represent their grievances, concerns, and complaints to department heads.  This move essentially primed the pump for public employee union organizing within state government.

“The establishment late last year of a broad meet and confer process for all of state government, without public discourse or legislative policy discussion, unnecessarily exposes the state to legal claims and conflicts with Arizona’s right to work laws,” according to Governor Brewer’s press release. 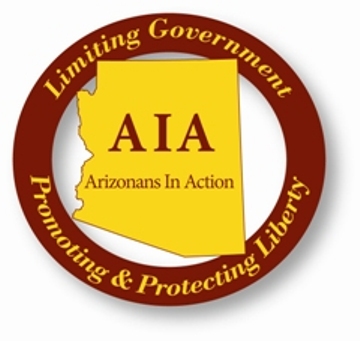 Arizonans In Action, who led the charge against this executive order issued by Napolitano in the waning days of her administration, responded to the news and had this to say:

“This is a great day for the taxpayers of Arizona… We know Governor Brewer saw that this issue was important to Arizonans, felt the support of our members, and was able to come to a decision reaffirming Arizona as a right to work state,” said Nathan Nascimento, Executive Director.

“Governor Brewer, by rescinding this order, has protected the rights of state workers, preserved the voice of the taxpayers, and restored honor and integrity back to the office of governor.”

This statement comes on the heels of a the reminder that Arizonans In Action sent to Governor Brewer just days before her order.

Governor Brewer should be thanked for standing up to the strong arm tactics of the unions and looking out for Joe and Judy Taxpayer.